We no longer update our workdays here but this tells the story of our beginning.

Update: Fall 2013
We had several busy work days this fall.  In our initial bed we re-established the chip boarder, weeded, continued work with cardboard and chips on the banks.  Weeds had taken a good hold where the flooding had killed the alfalfa so we broad forked again, spread new sheet mulch: some manure, cardboard and leaves with plans to replant in the spring.  We were pleased that the soil was less compacted and easier to fork.  The bank over the second guild was weed whacked. Plans were made to sheet mulch again around our trees in preparation for spring planting as hopefully before snow flies. We continue to need more chips. 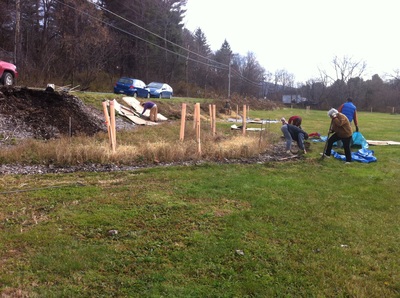 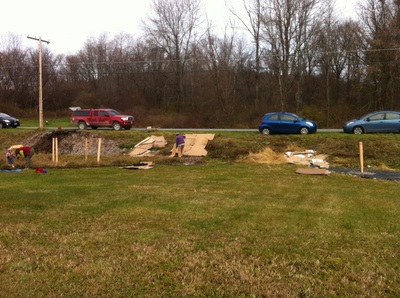 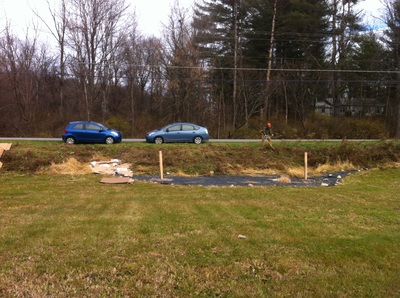 Update: Summer 2013
Rain and more rain.  The garden is not longer flooded from spring rain that overwhelmed from the culvert but still too wet to work much so no work days. Our new trees needed little water and seem happy.  The alfalfa is not so happy.  We are considering how to move water from the culvert away from the garden - hopefully by having the village dig a swale. The water levels appear to be too variable to design a rain garden. We are also appreciating the consequence of not being in the garden much with the proliferation of burdock etc and the need to have a simple and very hardy poly culture at this remote site.  We need more chips. 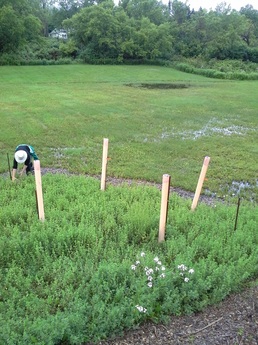 Update: Spring 2013
Planting days:
In the nut grove we put in put in 2 grafted Black Walnuts, 2 grafted Buart Nuts (grafted), 4 seedling Heart Nuts - with the intention of thinning to 2 trees so we can select the best nut quality), two grafted Shagbark Hickories along with several seedling Shagbarks for pollination.
In the paw paw beds we put in 4 paw paws, three red currents and 3 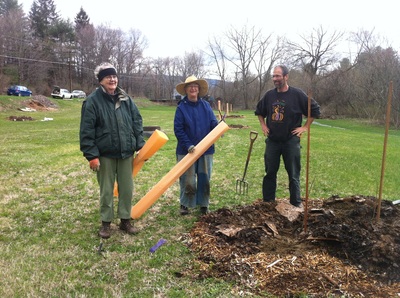 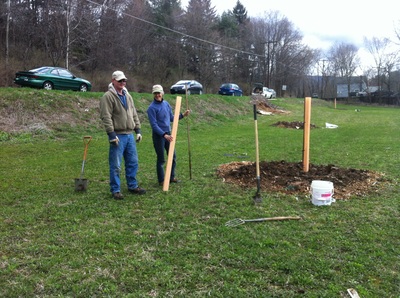 We laid out the Nut Grove canopy and put out small piles of chips at the tree sites.  Each is labeled with a stake bearing the name of the tree we plan to plant there.  There are 8 trees planned: two Black Walnuts, two Carpathian Walnuts, two Heart Nuts and two Buart Nuts.
We also laid out the Paw Paw guild with stakes labeling the shrub and tree layer.  It all shows great promise!  Chocolate covered goodies and coffee were enjoyed.
We do need more chips to complete the installation of the water tanks and to control weeds on the bank. 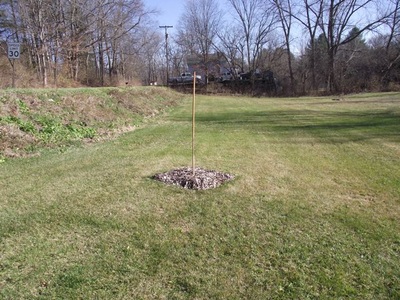 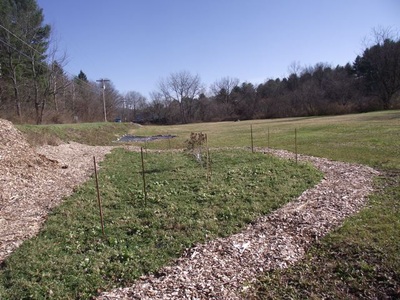 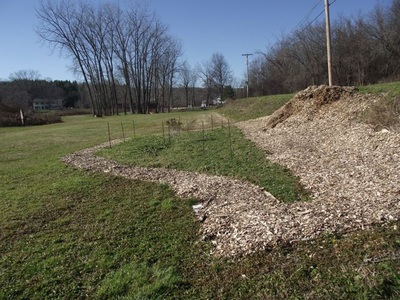 We worked on the Paw Paw guild: weeding the edge of the alfalfa planting and creating a boarder with cardboard covered in wood chips
Barrels for irrigation were assembled and installed
Muffins and hot cider were enjoyed
Here are some pictures: (click to enlarge)

UPDATE on our last work day:
The day went well: we broadforked the whole area, and came back briefly the next morning to plant the area with a cover crop of alfalfa and daikon radish. Delicious warm crepes, and scones baked on site. Quite a setup--if you missed it.. 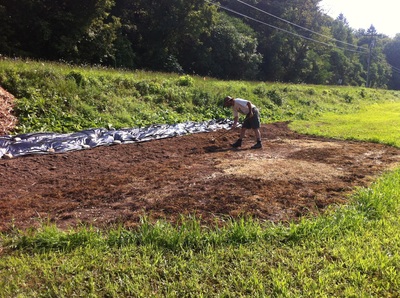 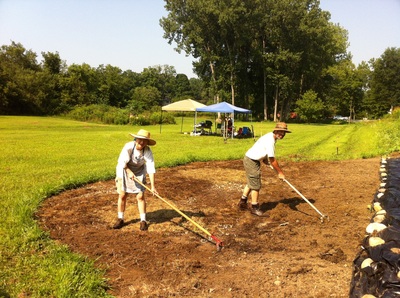 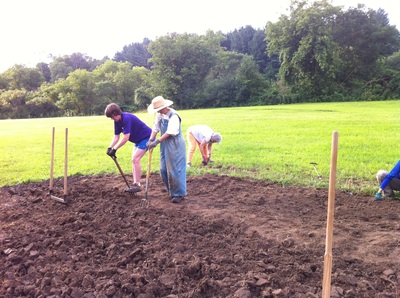 There is lots of work for lots of people here.  Here are some of the jobs that need doing:

Design Team - this group's work will be carrying on the design work we start during the Permaculture course in January - please plan to attend that course.

and if you are cash rich and time poor:
Fund Giving Friends - Your contribution is tax deductible.

"The ultimate goal of farming is not the growing of crops, but the cultivation and perfection of human beings."
-Masanobu Fukuoka